With the Academy Color Encoding System (ACES) becoming omnipresent more and more, it would be worth keeping in mind that it’s not the only solution to have a good color-managed pipeline (let’s keep that for a future article) . I’m not going to try to go too far and stick to the title even tho there is a lot to discuss on the topic.

If most people get into ACES, it’s mainly for its “filmic” looks (provided by the RRT), rather than having a full color-managed workflow. And that is understandable, as individual artists, you most of the time, only care about having the prettiest image possible at the end.

So what if you got a well-formed and pleasing image at the end without having to go through the complexity of ACES ?

My post mainly targets the VFX-CGI audience but OpenDRT work on any open-domain/scene-referred data, including photography and cinematography. (as long as the data is not in a closed-display-domain).

This means that for CGI, you are familiar with a “scene-linear workflow” :

Then the OpenDRT implementation is only available as a Nuke Gizmo and through Davinci Resolve DCTL feature (on paid licenses) which imply you are using one of these dccs.
No OCIO support, this means you will have with your traditional workflow in your rendering DCC and only be able to preview the final image in your post-prod one which is not an ideal one.

With all of that , this mean my post is aimed at individual artist doing personal projects that would like a quick solution for proper SDR-HDR export. (OpenDRT is probably aimed at additionals goal)

First, please have a look at the above repository, read Jed’s explanations and the tool’s documentation.

Before diving into the setup I think it’s important to remind the target of OpenDRT:

The tool has for goal the faithful conversion of open-domain / scene-referred data to a closed-domain : the display. This mean no creative transformations are applied. As such the output’s result can look very neutral and should be graded.

As the tool is constantly changing, Jed’s documentation is not up to date, and thus this post will also probably be.

All the examples are using Opendrt version 0.0.90b2 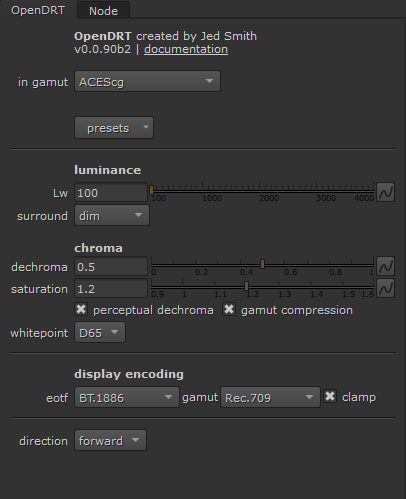 First thing, tell the tool in which gamut your input is.
I assume the input should be Linearly encoded.

You then have a bunch of presets that will tweak the knobs for you based on your target display encoding.

Lw : this is the nits level of the target display and shouldn’t be used as a creative adjustment.

surround : the luminance level of the viewing environment.

dechroma : this one is more “subjective”, allowing to control the amount of chrominance compression that should be applied on values reaching display maximum (R,G,B=1.0). If HDR imagery needs to be produced, this can be lowered (as the target domain (hdr) has more volume to express chroma)

saturation : Expand chroma on the bottom values after the compression by the dechroma. See more here .

display encoding : This part will be re-addressed under.

To adjust these settings properly you have to know the targeted display + user :

The issue is that with today range of displays, this is a rather difficult one to average (until you have the full-control on the display the image is going to be viewed on )

In the case of web publishing, for example, the average user will probably have a SDR display, sRGB encoded, with an average white peak of 100 nits and used in an office environment that can be brighter than a dim surround. If we add smartphones to the equation, thing will get messy …
I’m still digging on the subject trying to gather more info and as such will close this topic.

So for now, using the presets is, I think a good practice.

Alright, you now have the OpenDRT node.

Things will now get a bit complicated at first. The issue is that has the OpenDRT handle the scene -> display conversion, this will collide with Nuke that try to do the same in the view-transform.

I found 4 different solutions that achieve the same result. I think the last one is recommend to use but it’s good to have other example that might help to understand how everything works.

I didn’t test any of these solutions with HDR display-encoding so further investigation needs to be done.
I will keep the defaut BT.1886 value for the eotf, but to match the nuke’s default config I should have use sRGB Display.

We let the DRT handle everything (with display-encoding), then we apply the invert transform that applied by Nuke: 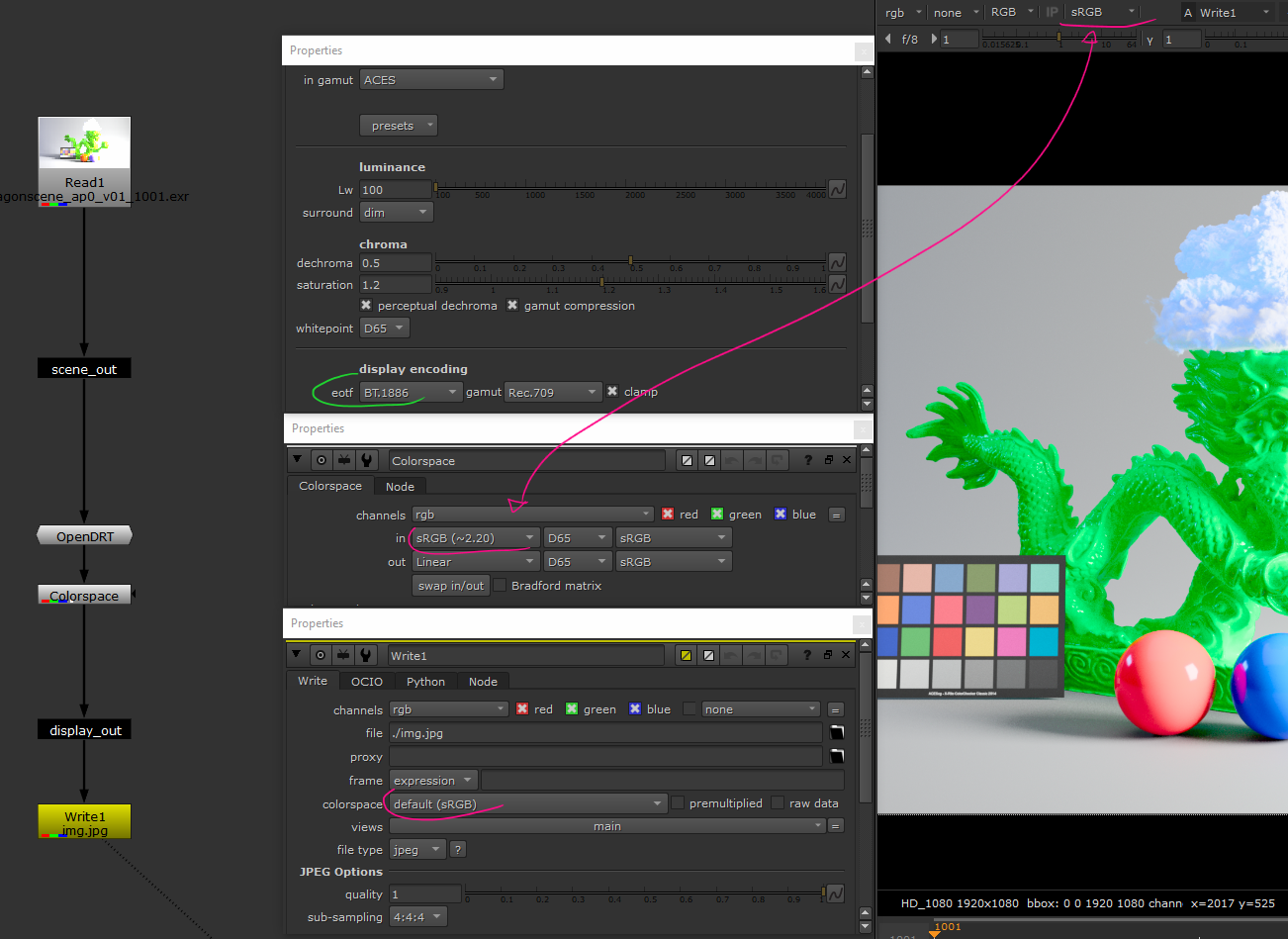 Writing the data is as before. You just have to be sure that the Colorspace node has the same in parameters as the colorspace one on the write node.

We disable Nuke’s handling of the display-encoding. The DRT is the last step. 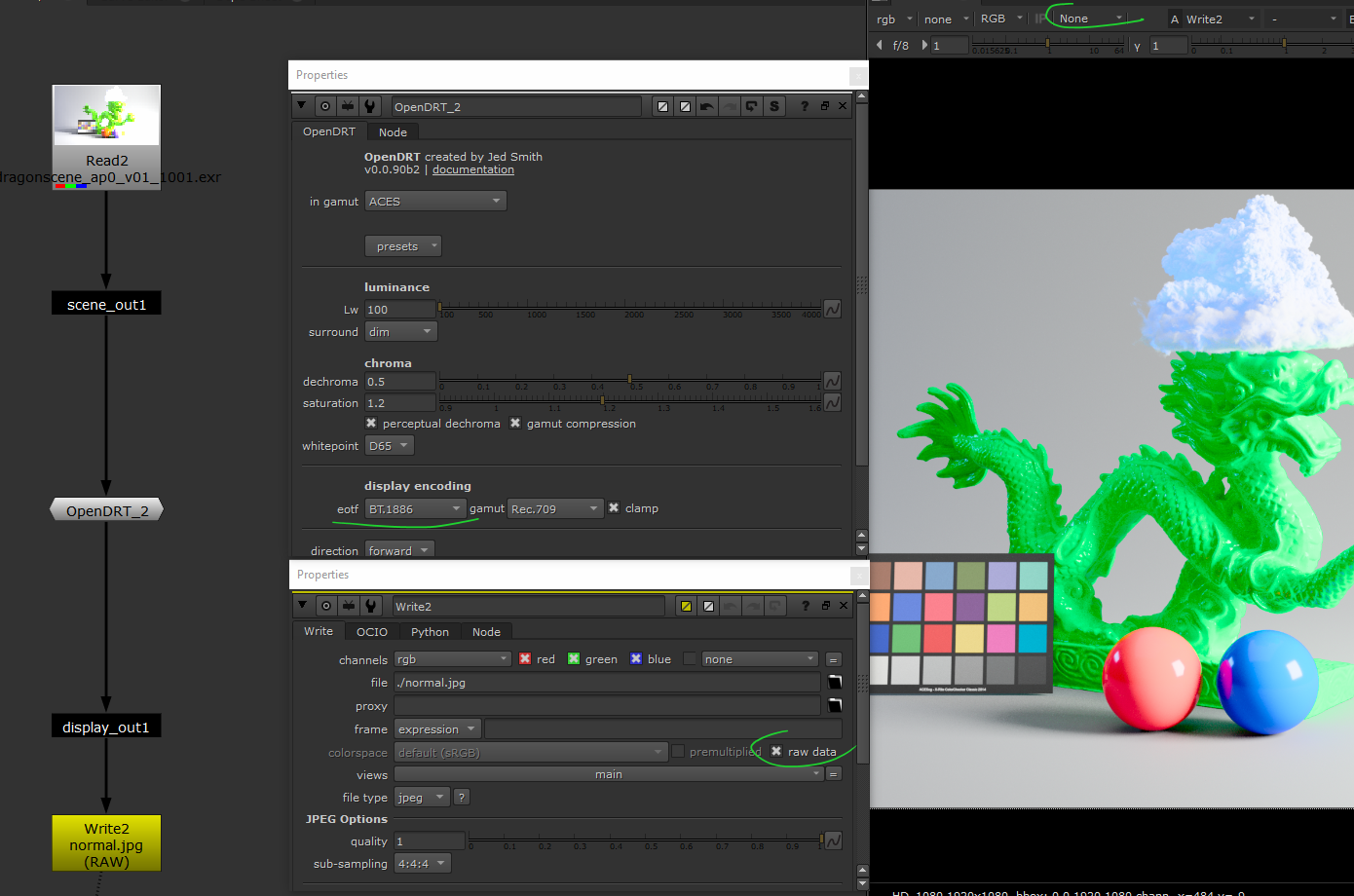 This means the Nuke view-transform is always off which can be incovenient when you need to preview a node upstream.

One good solution: the OpenDRT doesn’t handle the display encoding but output closed-domain data ready for the display. Nuke apply the display-encoding as usually, writing data is the regular workflow.

Be careful as OpenDRT still handle the gamut conversion from the input to the output. Write node colorspace need to be choosen with this is mind. 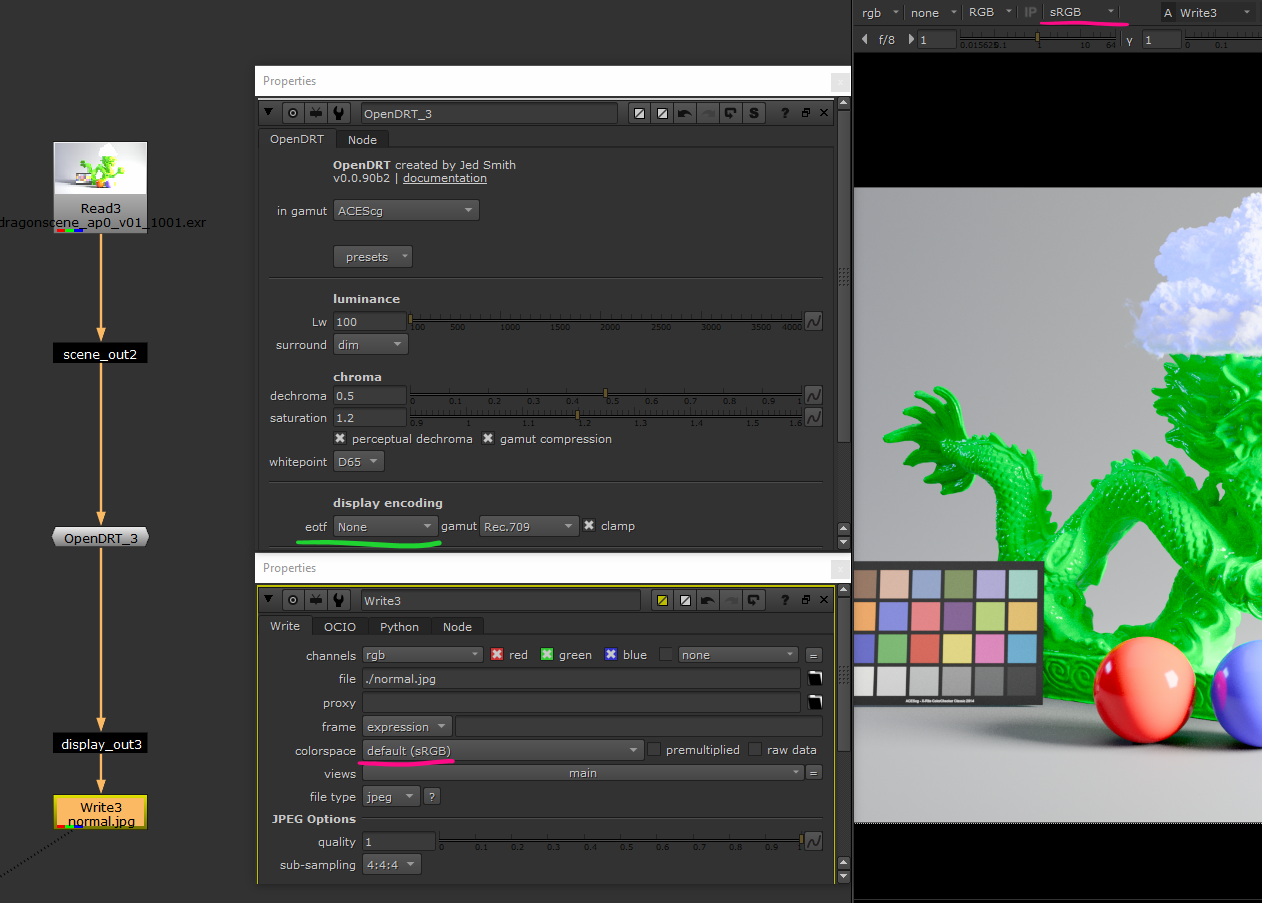 This is probably the best solution :

OpenDRT handle everything, we disable Nuke view-transform but we will be using its input process feature.
This will allow to always have the OpenDRT active no matter what node we are previewing (this can be inconvenient when viewing scalar data like alpha, think to disable the input-process in that case.) 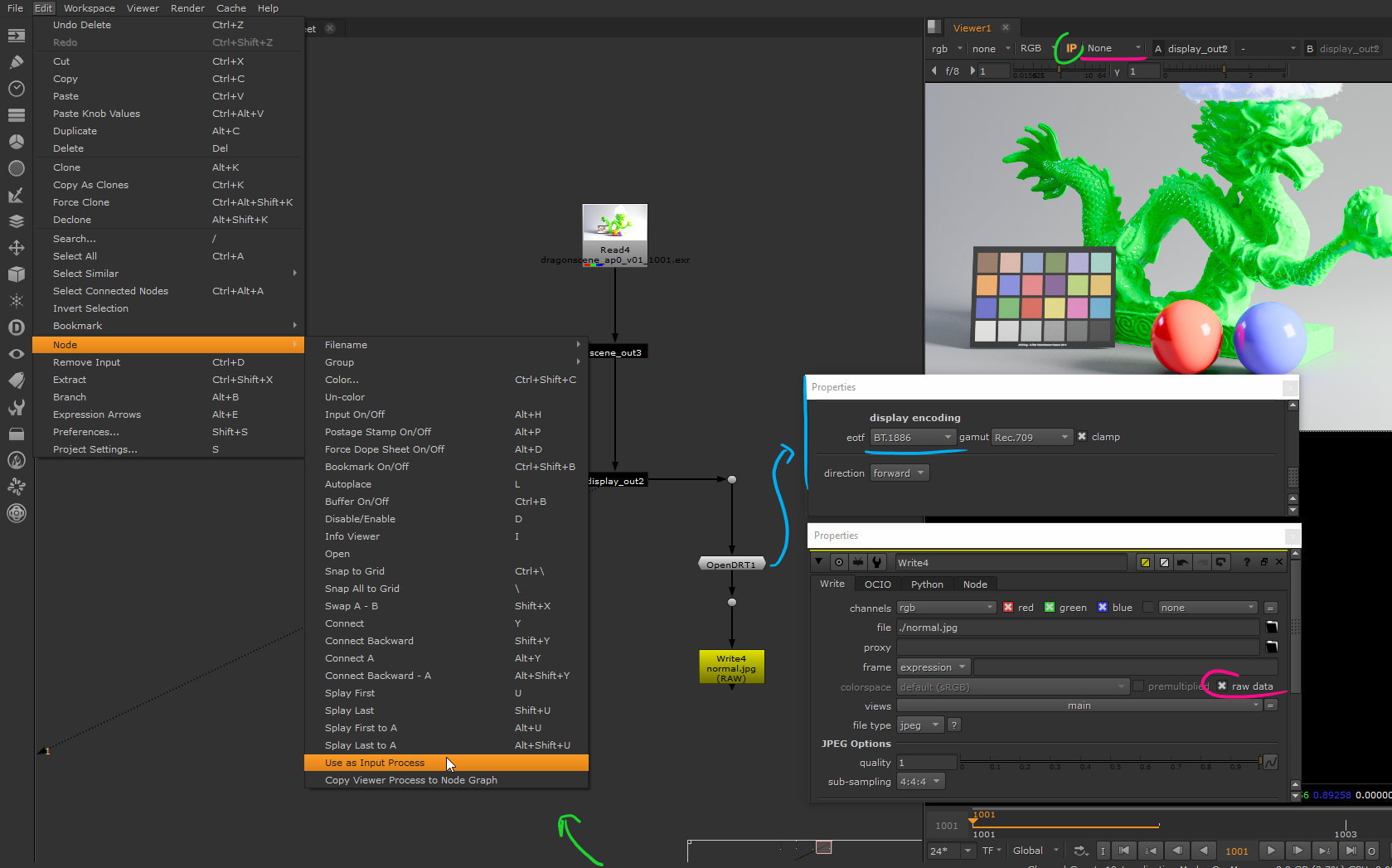 We don’t actually need the node used as input-process to be connected to anything but here I’m making sure it’s connected before the write node, so OpenDRT get baked in at export.

As OpenDRT handled the display encoding we can turn it off on the write node by checking raw data.

If you tried to compare the result to an ACES processed image you would have probably notice that the image-formation produce much more “excepted” result, among others, in strong colored highlights, which make OpenDRT a solid candidate at better image-formation and a peak of what could be used in the future.

Even if it’s current form kind of break the purpose of a consistant color-managed system across DCCs, it is a nice solution for individuals and looks very promising. (Jed told me it could be actually pretty simple to create an OCIO config so we can only hope he finds time to !).

Make sure to star Jed’s repository on Github !